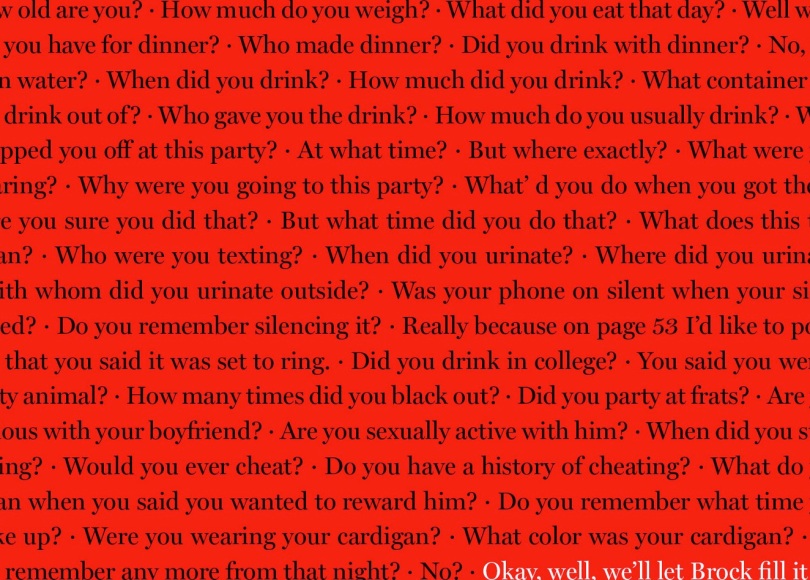 Flitting listlessly through my timeline, I was arrested and perplexed by this wall of interrogation on a red background. Turns out it’s the narrowed, pointed questions directed at the woman sexually assaulted by Brock Turner, during a harrowing rape trial.

If you’re not one of the millions (it went viral) who has read the powerful and graphic 7000-word statement she addressed to her attacker in court, I urge you to read it now. She starts:

You don’t know me, but you’ve been inside me, and that’s why we’re here today.

Having read and re-read it numerous times, I’m shaken and enraged on these 8 counts:

1. The terrifying assault. Horrific details of a 23 year old woman unconscious, wounded and naked, with abrasions and dirt in her vagina, being raped behind some wheelie bins in the middle of the night.

2. The appalling aftermath. Deeply saddened by the far-reaching impact of the rape on her whole being, her life and family.

3. The paltry sentence. Juxtaposed with the victim’s devastation, the outrageous leniency of the rapist’s sentence: 6 months in a county jail – of which he’ll serve half – instead of a potential 14 years in a state penitentiary, despite unanimous guilty verdict. (Judge Aaron Persky feared a longer sentence would have a ‘severe impact’ on the promising athlete). This embarrassingly short sentence doesn’t fit with the seriousness of the crime. It gives the message that a stranger can be inside you without proper consent and he will receive less than what has been defined as the minimum sentence. It’s why so many men believe they can do whatever they please to a woman’s body without accountability. And why so many victims of sexual assault never come forward. Currently in the UK, it is estimated that of the 85,000 women raped every year, an estimated 15 per cent are ever reported to the police, and of those, the conviction rate is a deplorable 6.5 per cent.

4. The dad. Brock’s father wrote a letter to Judge Aaron Persky (excerpt below), in which he pleaded for leniency on the grounds that his son had already paid a steep price for the ’20 minutes of action’, alluding to it as an inevitable, ‘unfortunate result[s]’ of campus party culture. (And poor Brock can’t even enjoy a whole steak any more). Is there an attitude more likely to cultivate a rapist than a father who confuses drinking problems with forcibly having sex with someone? We desperately need men to show sons how to respect women, irrespective of beverages or clothing.

5. The victim-blaming. This woeful case is not as shocking as it should be. As a society we have some disturbing attitudes: Over a quarter of the public believe that drunk victims of rape or sexual assault are at least partially responsible for what has happened to them. Other ‘causative’ factors identified are: what she is wearing, her behaviour and how many sexual partners she has had. A third of people believe women who flirt are partially responsible for being raped (Amnesty, 2005). We need to stop blaming rape victims and start teaching people about consent.

And move away from this: 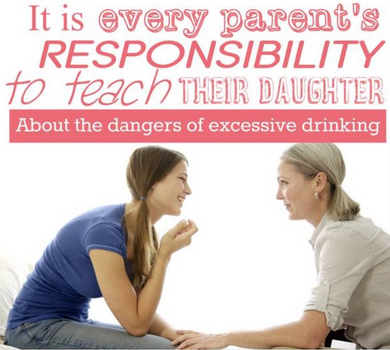 6. Brock’s lack of remorse – Doggedly attempting to dilute rape with the suggestion of ‘promiscuity’ (as opposed to the absence of consent), he still doesn’t admit to rape, only ‘drinking too much’ and ‘making bad decisions’. Yet, perplexingly, this lack of self awareness and taking ownership of his actions appears not to have affected his sentencing.

7. The white male privilege: real and insidious. Turner undoubtedly benefited from his white and economic privilege. It helped him hire a powerful attorney, expert witnesses, private investigators and ultimately secure a lenient sentence. He reaped the benefits of a judge who simply couldn’t imagine this white star athlete, from a prestigious university, in prison – he didn’t ‘belong’ there. There is plenty of evidence of socio-economic and racial disparities in sentencing. Again, failing to send out the message that sexual assault is against the law regardless of background, race, class, age and gender.

8. The terminology. Brock Turner was convicted of sexual assault but not ‘rape’. What does that mean? Does it mean that sexual assault is a less serious crime than rape? The FBI defines rape as

penetration, no matter how slight, of the vagina or anus with any body part or object, or oral penetration by a sex organ of another person, without the consent of the victim.

Yet Brock was convicted of assault with intent to commit rape of an intoxicated woman, sexually penetrating an intoxicated person with a foreign object, and sexually penetrating an unconscious person with a foreign object. The distinction between rape and sexual assault feels dehumanizing to me. Whatever we call rape/ sexual assault, it can be intensely traumatizing with lasting impacts on a victim.

What could this mean for our maternity services?

I’m interested in how women carry this internal, unseen damage and how pregnancy and birth can be deeply traumatic for rape victims. For some, giving birth is a reminder of rape: vaginal examinations, contractions forcing the body out of control, being exposed, in positions reminiscent of the abuse, strangers touching without consent, watching, inadvertently using triggering language (‘just try to relax’; ‘open your legs’; ‘relax your bottom’; ‘just let yourself go floppy’; ‘the more you relax, the sooner it’ll be over’ and so on). Sheila Kitzinger, Penny Simkin and others have written extensively on the short- and long-term effects of sexual abuse on childbearing women.

‘Being so out of control of my body again, it made me remember everything. Then I started seeing his face throughout the labour; it pushed me over the edge‘

That’s why I’m very excited to see that St Bartholomew’s NHS Trust, is opening in July the UK’s first maternity clinic specifically designed for women who have been sexually assualted. Pavan Amara of My Body Back Project, consultant midwife Inderjeet Kaur, and obstetrician and gynaecologist Rehan Khan, have created a different birthing pathway to ensure women who have experienced sexual violence receive the sensitive and specific care they need. The maternity clinic will be offering the following services:

I salute the woman who wrote the unflinching emotional statement to her attacker, Brock Turner, turning pain into strength. And I salute you Pavan, Inderjeet and Rehan for setting up this groundbreaking clinic, increasing choice and ensuring tailored, sensitive care is available for the 1 in 5 women that has experienced sexual violence, when seeking maternity services. I hope similar clinics and birthing pathways appear across UK and the world.